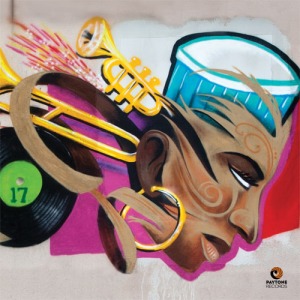 I think y’all are going to dig this one. It’s what Prince was going for on the Madhouse joints, but we leaned closer to Funk and Soul — with a flare of New Orleans, of course. It’s like Leon Ware and Marvin Gaye – I Want You meets the vamps of The Meters and the cues of The Ohio Players, with a touch of Herbie Hancock and Patrice Rushen thrown in, and a dash of Jay Dee. But it don’t sound like none of that shit at the same time.

This album was recorded at Jellowstone Studios on all live instruments in one room with these cats out of VA called “Butcher Brown.” Butcher Brown is Corey Fonville on drums; Devonne Harris on keys and bass; Keith Askey on guitar; and Andrew Randazzo on bass.

Fonville’s been working with me since 2010. I met him while he was still in college. I kept my eye on him and snatched him up as soon as he finished. He had been telling me about Harris, aka DJ Harrison, for years. Being the product of mentorship myself, the idea of sharing, lineage, and ancestry inspired me to get with these cats whom I felt a kinship. Sankofa is the spirit of Paytone Records. Go back and get it!

When we tracked, I played mostly Rhodes and just a hint of trumpet with the idea that I would go back and overdub solos. After I lived with the material for a while, I came to love it just the way it is. As a result we may have recorded the hippest, funkiest Play-A-Long album that’s ever been documented. Musicians, rappers, singers, DJs, and lovers have in this collection of records an album designed for you to float on top of. It’s a bed of sex wrapped in 500-thread count sonic sheets. The idea is that we leave space for you to find yourself in the music. In the New Orleans tradition, collective interplay is key. The cats from Virginia fit right in with my concept.

I had these motifs sitting around for years — these little 2 and 4-bar vamps. Part of the reason I started Paytone Records is to get all this stuff out, so I can do it on my schedule and not have to wait for the green light from someone else. I stopped writing songs over 10 years ago. I get moments of melodic, chordal, or rhythmic inspiration and I put that down. They write themselves. That’s the real stuff.

When I began to assemble all of these melodic fragments, I was astonished at how seamlessly they all fit together. It’s like when you buy clothes and pick up a tie here or a vest there. Then you go to your closet and arrange an ensemble and it works as if you bought all the pieces at the same time, but it’s an assortment of things you’ve accumulated over the years. Because they were all picked with your eyes, it works. That’s what composing is for me these days.

So far, Butcher Brown and I have done two sessions. The first was September 9 – 11, 2013, and the one that produced Numbers was from December 18 – 20, 2013. The last tune we did in the first session is called “One,” so I called the first piece from the 2nd session, “Two.” So if you’re wondering why the first track on Numbers is “Two,” and it makes you ask, “Where’s One?” you’ll have to wait for the first album.

If someone wants you to describe what Numbers sounds like, tell them it’s like Nicholas and Butcher Brown took a time capsule back to 1973 and played a gig for the people demonstrating what’s happened in music for the past 40 years.